When photography morphs into tridimensionality, does it loose a constitutive element, does it change artistic category?
When, between the 80s and the 90s, photography was making a new, but, this time, decisive and large transition away from its documentary function, French intellectuals coined the concept of photographie plasticienne. There’s no real english translation for this expression: creative photography, art photography and fine art photography do not render the notion of plasticity introduced by Dominique Baqué. The idea is that photography, far from its traditional, ordinary use, can be fabricated out of multiple materials, models, and set-ups. It can be moulded (plasticity comes from the Greek plásma -atos meaning moulded, shaped entity) by artists through the intervention of various (increasingly digital) technologies which alter forms, colours, and even volumes.
The notion of photographic plasticity adds sequences to the photographic act: there is a pre-photografic phase,  where objects are either planned or organised or even staged; there is a post-photografic stage where images are often heavily reworked, mostly digitally; and there is a beyond-the-photographic stage where other, complementary process comes to question the foundations of photographic culture.
Most of the Paris Photo market relies on photo plasticienne. There is genuine collectors' interest to acquire works which exist beyond the photographic stage and are in stark contrast with the ordinary set up of photography. This selection presents 6 different, but significant approaches to move way beyond the ordinary; each one characterised by a unique technical difficulty, each one requiring a unique final set-up.

Agnès Geoffray / galeriemaubert.com is known for her folded silk prints (on the right). At the bottom of this page you'll find two works from the series Les Captives (2020) which she has produced with the help of a glass craftman (Stephane Pelletier). Pelletier has locked in a glass box strong images of a past which Geoffray wants to be haunting or deeply ambiguous. A skilful intervention. If you have ever attended a demonstration of glass moulding in Murano you would know that closing 'the box' without burning the picture is a true technical challenge. A voluminous presentation of Geoffray’s work is available here

Jussi Nahkuri /Persons Project (below, at the end of the post) - Nahkuri's starting point is Henri Bergson's philosophy of time, specifically the great importance of the immediate experience as a device to understand time. Nahkuri proceeds by taking hundreds and hundreds of pictures of a same location. With the changes in luminosity and tonality, these individual images of moments form, once stacked up in a continuum, a stream of coloured bars which Nahkuri prints on archival paper and glues on cylinders or on rectangular aluminium tubing. Standing on the Shore, 2021 displayed below is 150 × 178 × 10 cm work produced in an Edition of 5 + 1AP (it's on sale on Artsy).
The Italian novelist Cesare Pavese said we don't remember days, we remember moments. If our memory is mostly coded in the form of photographs (and more rarely coded in short animations), Nahkuri's work on momentariness suggests that the continuum of time erodes all details. Only a blurred impression remains. Unique and aleatory, as the author stresses, but blurred and indistinguishable. 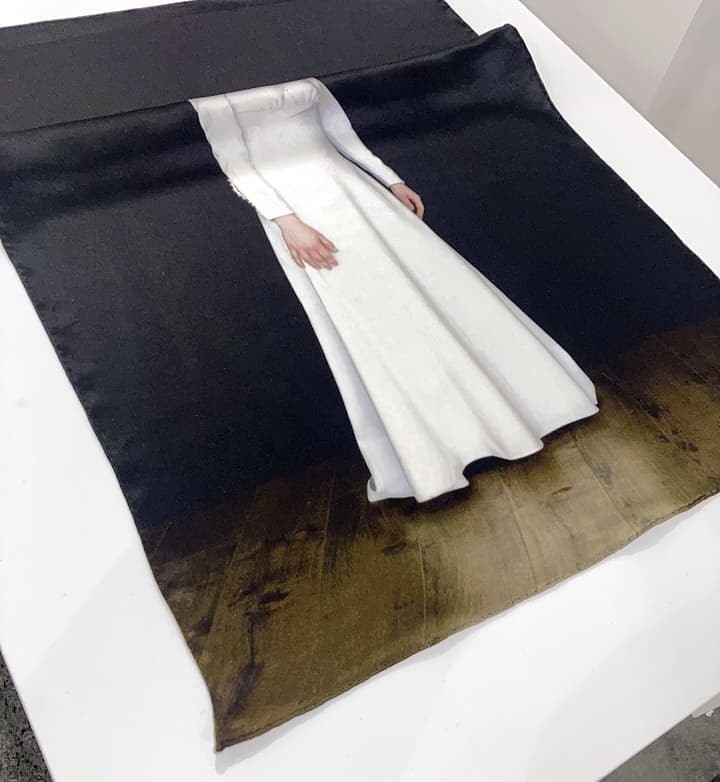 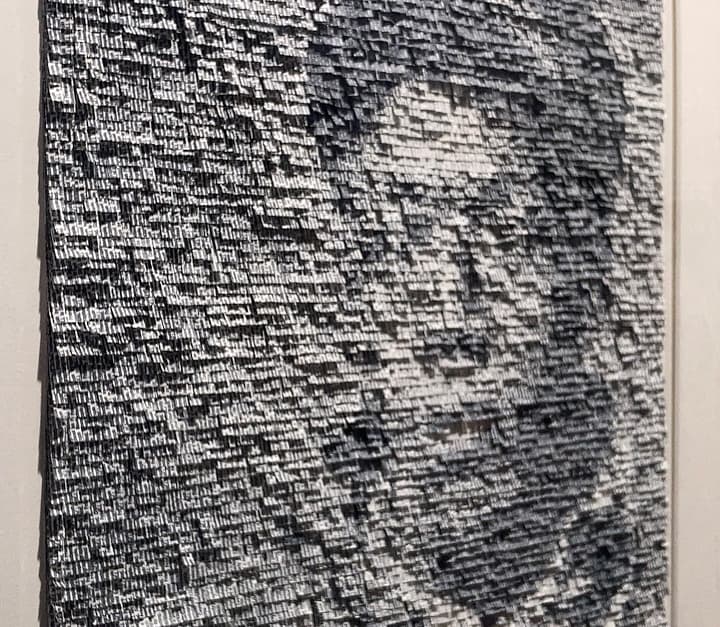 Nathalie Boutté / Yossi Milo Boutté does not have (like Claudio Edinger, or Castro Prieto, two of my curatorial highlights for Paris Photo 2021) a specialised training in visual arts, but with her impressive collages she creates  objects beyond photography. Nathalie Boutte’s favourite medium is paper, Japanese paper specifically (she has used also banknotes, old books, and road maps). She first prints a text about the picture she intends to reproduce (she mainly daguerrotypes and autochromes but the images shown here have different origins). She writes about the emotions that those pictures trigger in her. She then cuts the paper in small units that function like pixels of a bigger image. Each pixel maintains of a form of readability, as viewers can recognise letters or words in it. Then, exploiting the small contrasts between sections of her printed texts, she builds a surface which presents scaled tonal value of the pixels she has built using paper cuts. Finally the painful assembly of all the pixels in a much larger collage creates a final image which looks, close by, like abstract art made of letters, and, far away, appears as the original daguerrotype. To sum up, Boutte assembles memory marks which are both language and images.
Her works  make me think of the Iranian revolution, when the US classified documents ripped into pieces by US diplomats were painfully reconstituted by the Revolutionary Guards. As you can see from the close up, every “pixel” of her images carries some meaning. Light bounces off these surfaces creating an addictive game for the viewers attention. Another way to achieve appearing and dissolving images, à la Robert Currie (see below).

Robert Currie / Van der Grinten Galerie - Cologne - born in London in 1976 Currie uses between 350 meters and a kilometre of tinted Nylon Monofilament to generate an image which can only be perceived in full when standing exactly in front of it (see details below). Even small lateral movements make the image dissolve. “Mai di traverso", that is, "you should never contemplate paintings by the sides”, says the title of a book of the Italian Art Historian Federico Zeri. Here the game is quite the opposite. It's a tridimensional and bi - dimensional work simultaneously. It disorients and then becomes a subtle enjoyment. 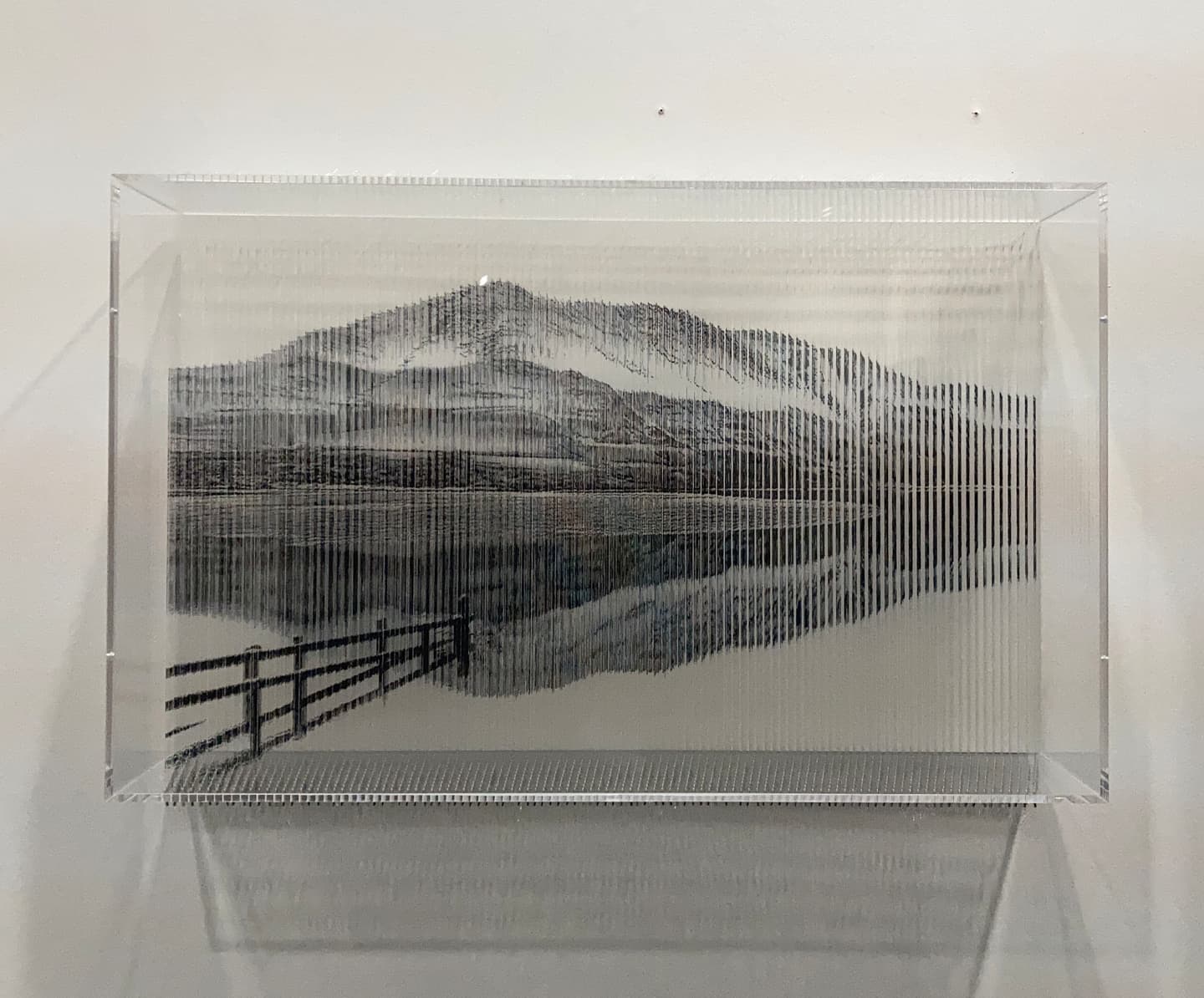 Lisa Sartorio / galerie binôme Angle Mort series #09 Foret de Rosewood - the forest is reproduced on Japanese paper which is folded to materialise a set of trees. An invention that stands out and which betrays the origins of the artistic training of Sartorio  (sculpture at the Ecole des Beaux Arts in Paris). I find the fully folded version (a picture of a forest in the shape of a branch) more convincing than the version (below) that integrates the folds into a bi-dimensional composition.

Juan Manuel Castro Prieto / I have always been a great fan of Castro Prieto, one of the Agence Vu artists who actually trained as an economist and is a self-taught photographer. His web site is a continuous lesson on composition and on the savant use of floue (de-focusing). Below you can see a composition of glass plates (20 to 40 cm) from the series Vanitas 2020. The technique he uses is inspired by orotones which can be created with albumen (as Peter O'Donnel does adapting solutions which date back the XIX century), or gilded using a golden paint (like by the Belgian Patrick Van de Branden)  or, using a golden leaf, which is the choice of Castro Prieto. The golden leaf clearly shines more than other solutions, but requires more dexterity to be laid down on the plate. When I saw this wall in the Agence Vu booth I could not refrain from thinking of Piero Fornasetti's furniture or the Tema e Variazioni plates series. 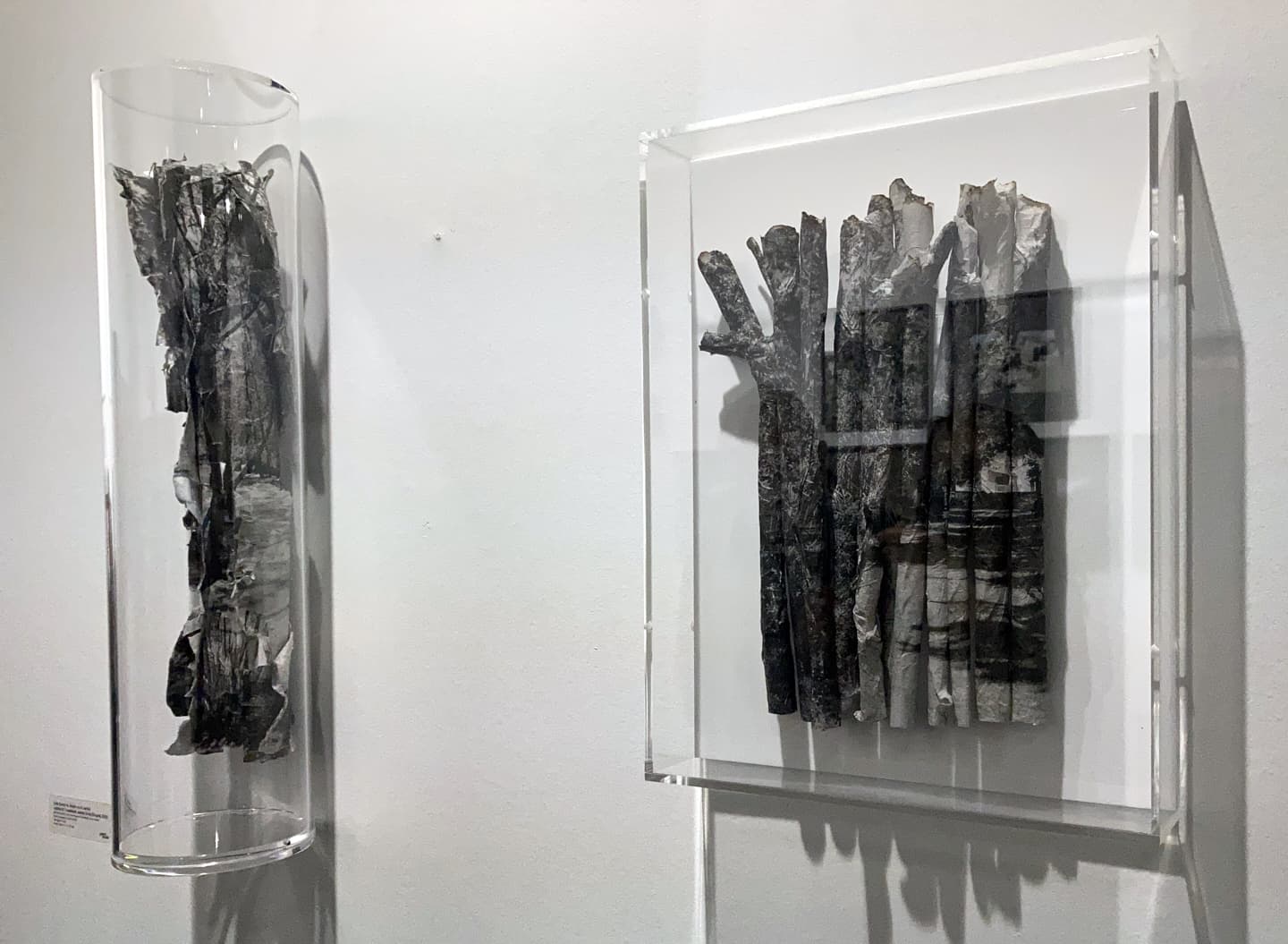 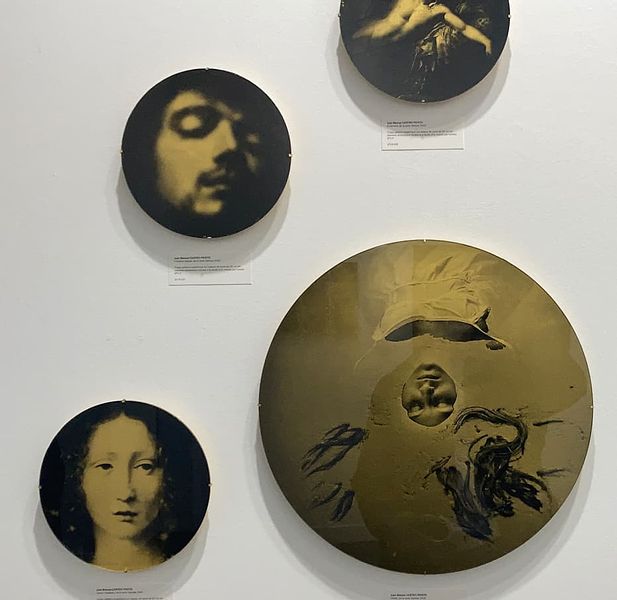 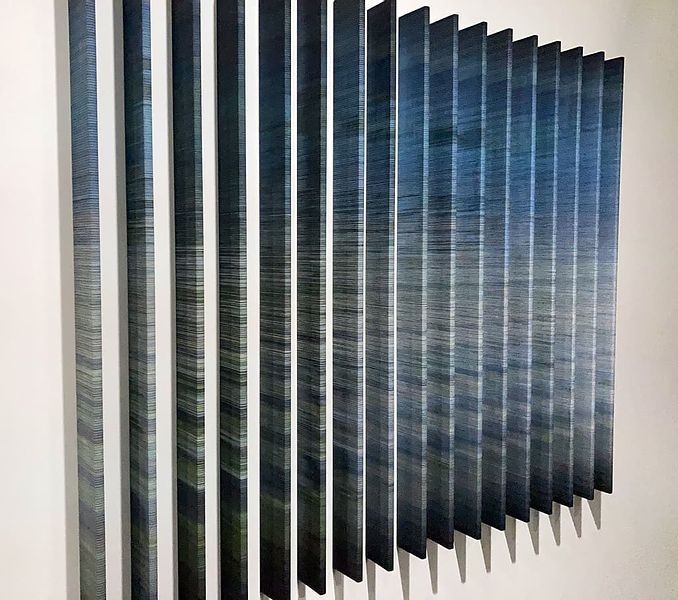 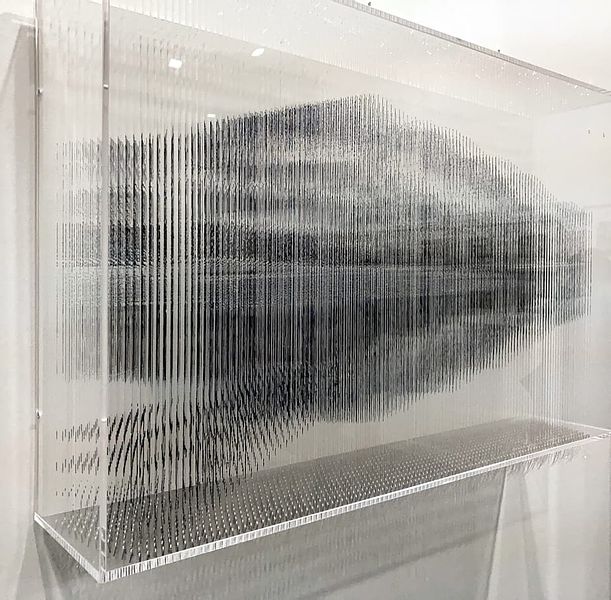 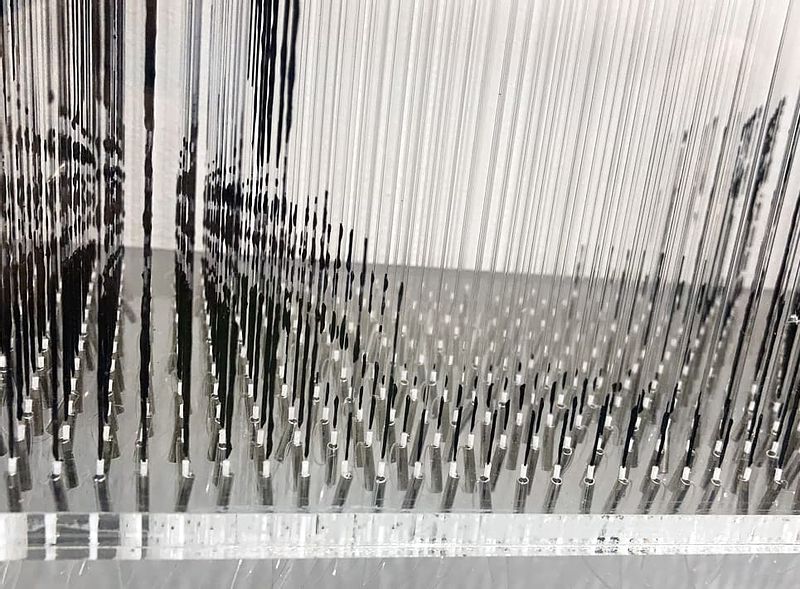 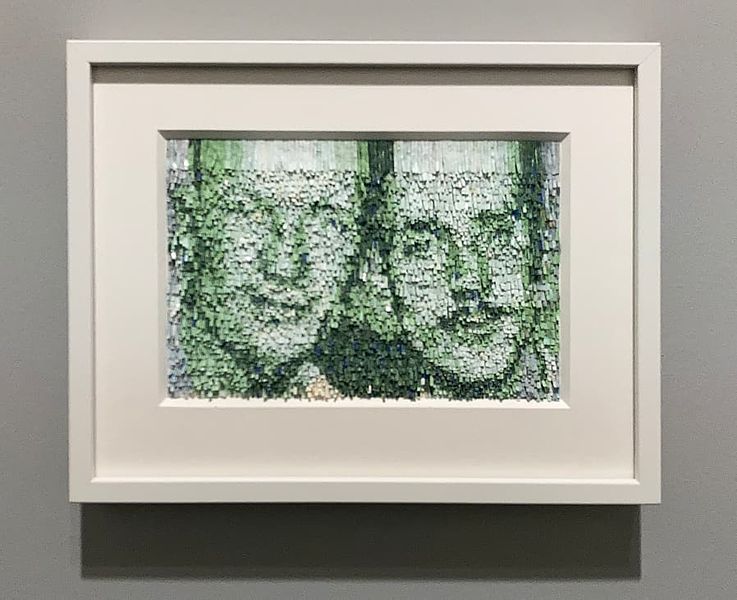 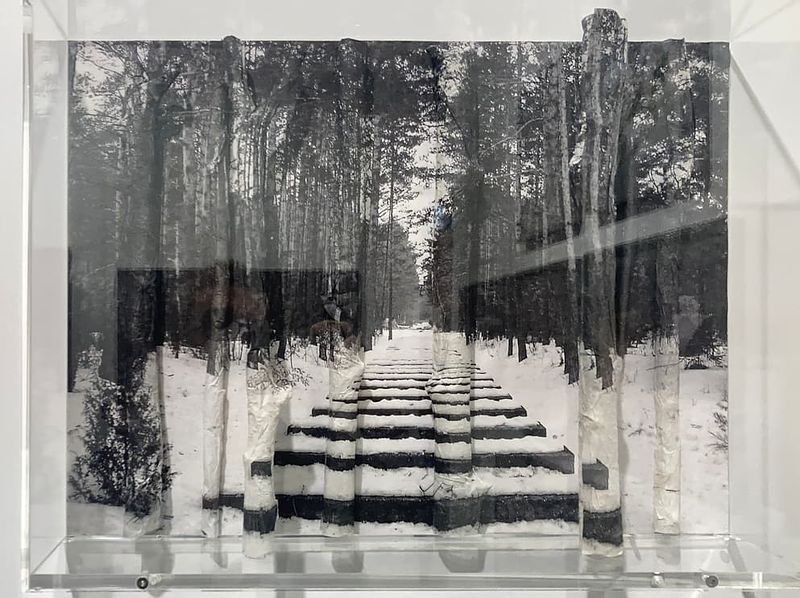 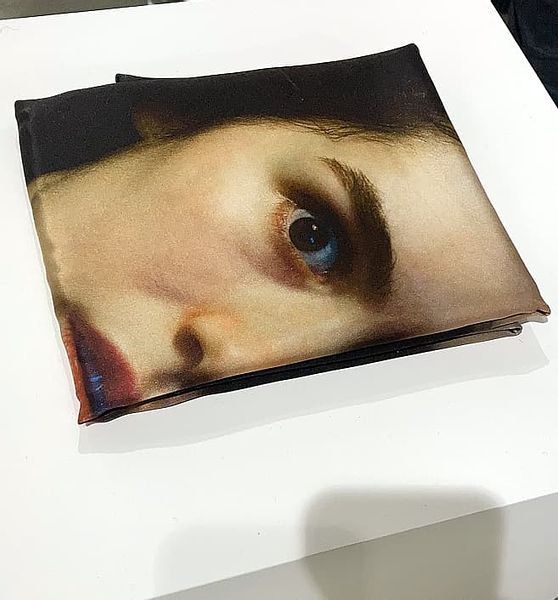 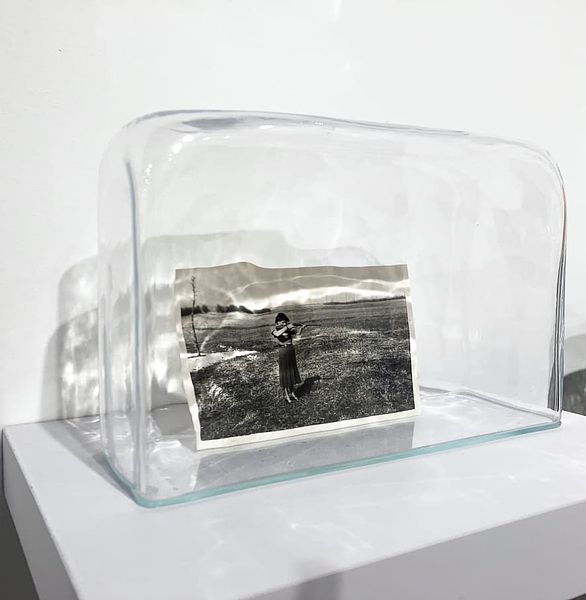 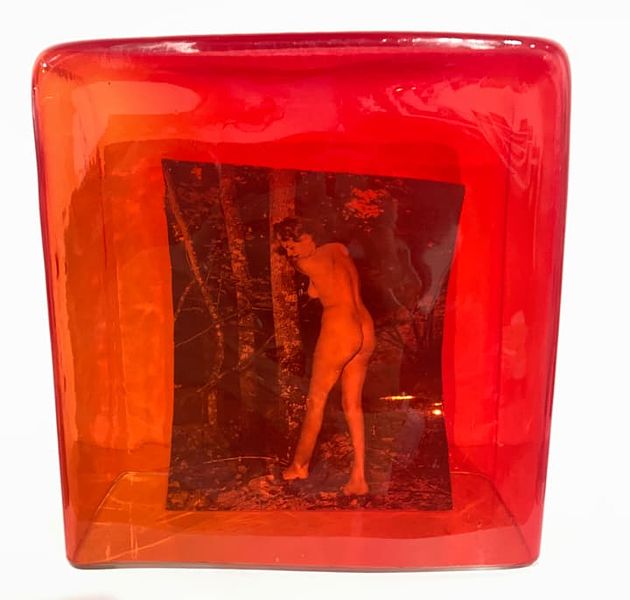