In this short post I want to focus on worked-over photographs as an initial strategy to go beyond traditional photography, adding value and dimensions, while simultaneously creating rarity. The approach negates reproducibility (it challenges Benjamin's point of view) and leads artists to produce collages, hand colored photos or over-painting, but also (increasingly) stitching or embroidery.  Below, you'll find a selection of 6 artists which have exposed ingeniously fabricated images in Paris Photo 2021.

Sissi Farassat / In Camera Galerie - Stay 2, 2019 20x25 Unique - C-print with Swaroswky. Iranian by birth Farassat takes needle and thread to each print, and hand-stitches thousands of crystals, beads, and sequins, transforming the photograph into a type of tapestry.  What's astonishing with this this type of intervention is that the surface of the photographs is not damaged by the crisscrossing threads. With sequins, Farassat's pictures become alive again and stand as a medley between a fashion image and a frame of a Disney animation film. You can access Farassat work on her web site or on Artnet

Iris Hutegger / www.ewgalerie.com - When I see the work of Iris Hutegger I am tempted to think that the initial idea for her process came from looking at color infrared pictures (based on Kodak Aerochrome Infrared Film). She actually prints black and white photographs of mountains and then proceeds by sewing them with a sewing machine (!). There are two truly remarkable aspects in her work. First, the colour of her threads is at the extreme borders of realism, but precisely because she goes far enough, and because she mixes several tones, she succeeds in adding a sense of 'otherness' to these classic landscapes. Secondly, chapeau for the technical achievement of managing prints of considerable size to be sewed (at the centre, not at the borders, please) with a machine. The artist wets the prints to make them more manageable, and I suppose that industrial sewing machines with long arms must be part of her technical set up. Still, it's humbling to see the beautiful and complex degradés that Hutegger places to create volumes and contrasts. 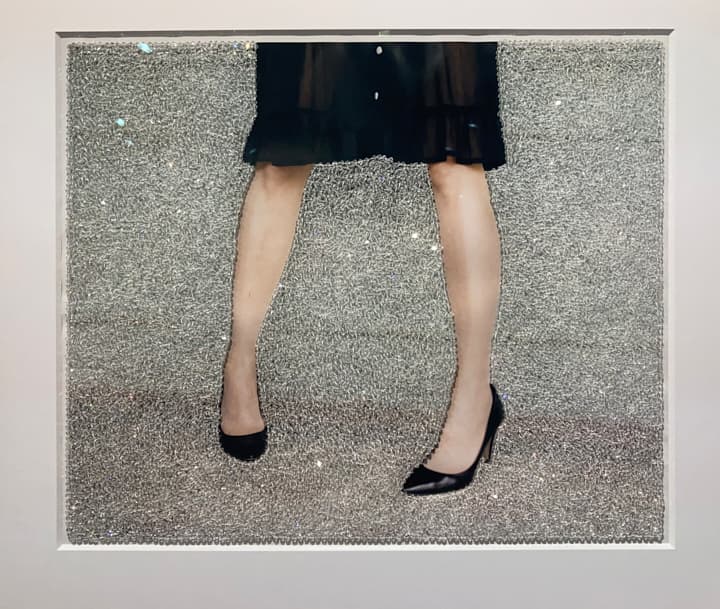 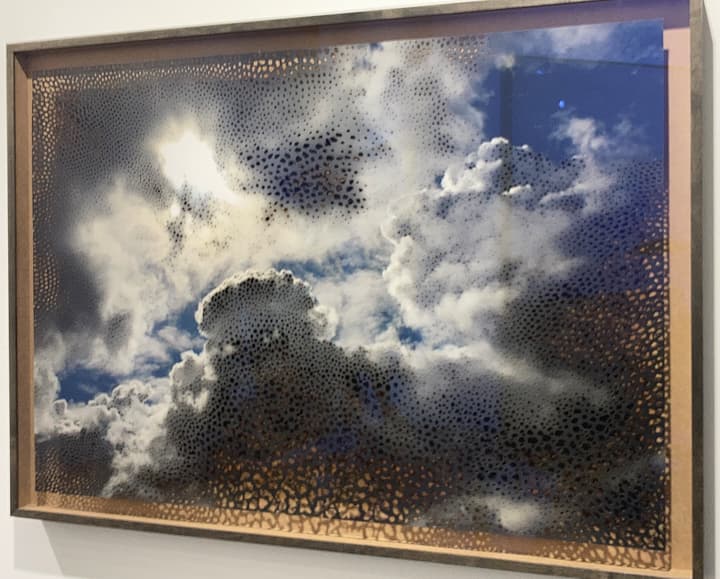 Carla Cabanas /GALERIA CARLOS CARVALHO ARTE CONTEMPORÂNEA I Don't Trust Myself When I'm Sleeping II - [Images below]. Ink on glass, light installation, photographic album, color photographs; variable dimensions. 2018 – 2020. A work on memory based on vernacular pictures of the late 60's early 70's, reworked with scalpel and the kintsugi technique of golf leaf. Wabi Sabi philosophy (repairing memories, turning scars and imperfection into pure beauty), encounters faded colours and gold with its symbolic resonance (think of fondi oro, Ravenna, Klimt, Yves Klein,... so many references...). Look carefully at these few pictures and also on her web site, to the rest of the series, and you'll be charmed by the subtlety, the finesse of the choice of the vernacular pictures used for this project. So familiar and ambiguous at the same time.

Miguel Rothschild / Bendana | Pinel Art Contemporain proposes with Aparicion on the left (2019) a clever tridimensional work based on perforations obtained by burning the surface of the print - the work is on sale on Artsy . Below you'll find also another Rothschild's work after the 'pointilliste' G. Seurat.

Flore / Clementine de la Ferronière - [Images below] Gelatin Silver prints toned with tea and waxed. There is “an air de Sally Mann” in this work on memory which reproduces the grain and the out of focus typical of historic large format lenses. In this post you can see two works from the series L’odeur de la nuit était celle du jasmin. It's some 60 images  on the Mekong region and French Indochina, a mix between the memories of Marguerite Duras  and the stories told by the artist grand parents which lived in the same time and the same places of Duras' fiction (L'Amant, here in the memorable film by Jean Jacques Annaud). Flore loves classic compositions: the tree placed at the centre of the field of vision (in the first image) is an old masters' compositional quote (think of this work of Claude Gelée or Rembrandt’s three trees).

Sarah Anne Johnson / Yossi Milo New York [Images below]. Johnson is one of the female photographers defended by Paris Photo in the past 4 years, also through the operation Elle X Paris Photo. When this selection started only 20% of the artist exposed in the show were female, in 2021 the percentage was up to 34%. She is Canadian and transforms her pictures (this is the series Woodland) with paint, photoshop, metal leaf, holographic tape, photo-spotting ink. The pictures are informed by her research on the ability of trees to communicate intelligently, but also anthropological research about indigenous relation with nature and the relation between old trees and the sacred.  Her work is on sale through Artsy 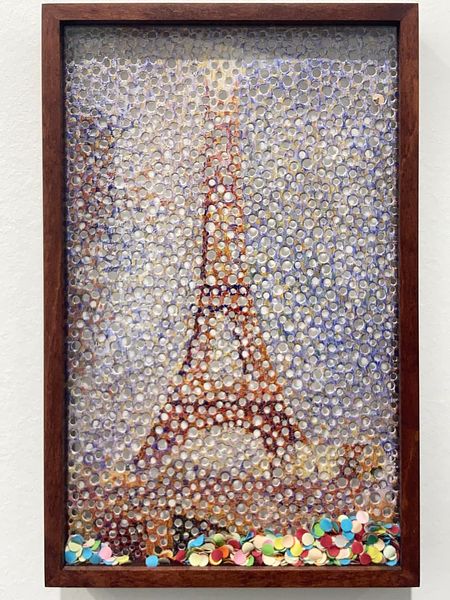 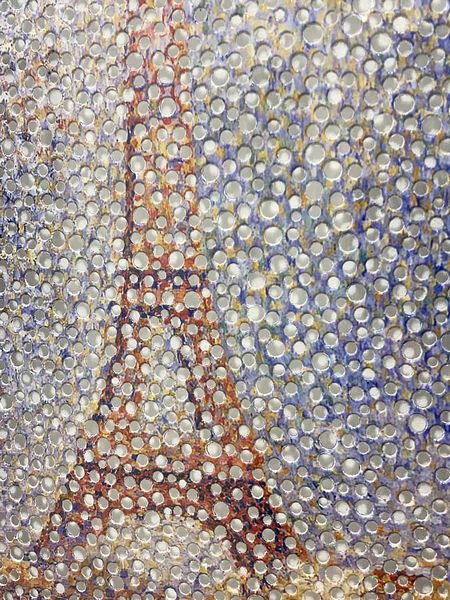 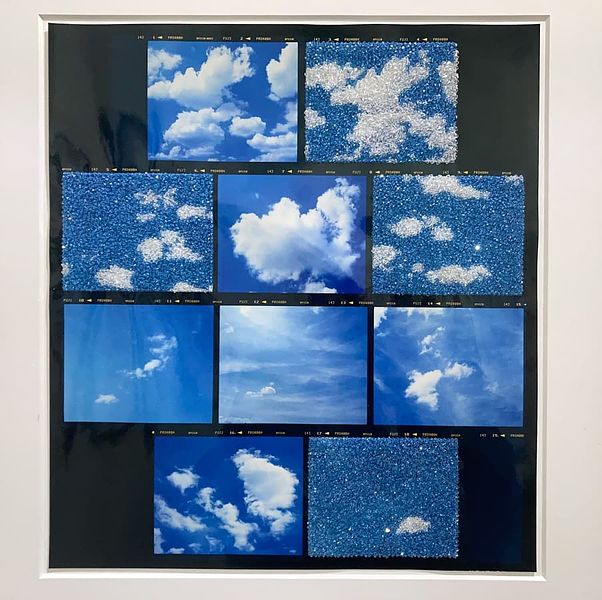 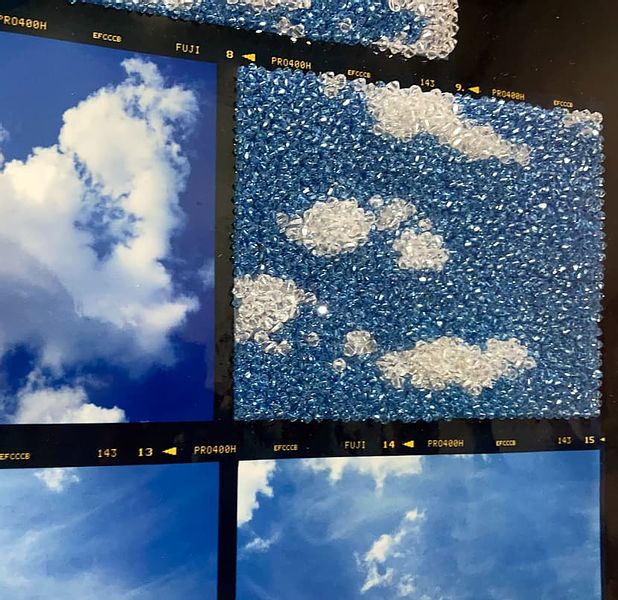 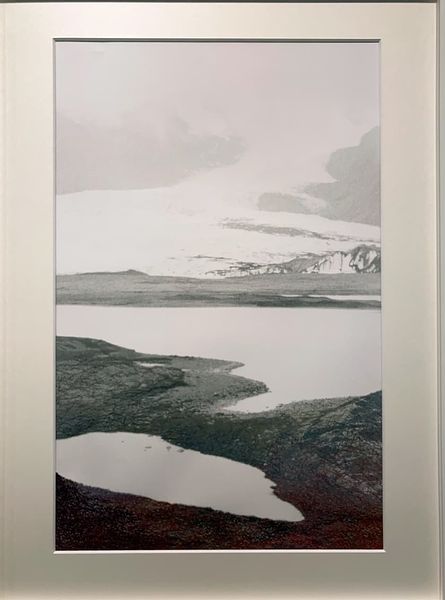 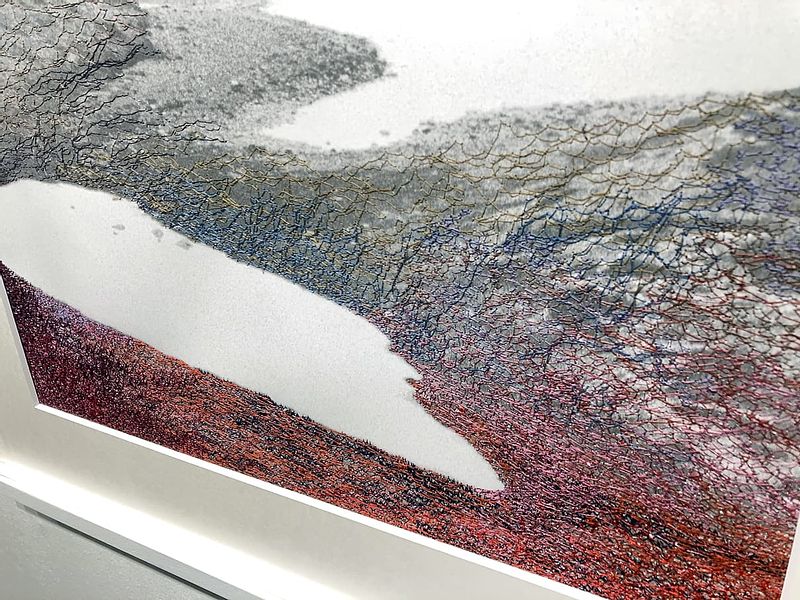 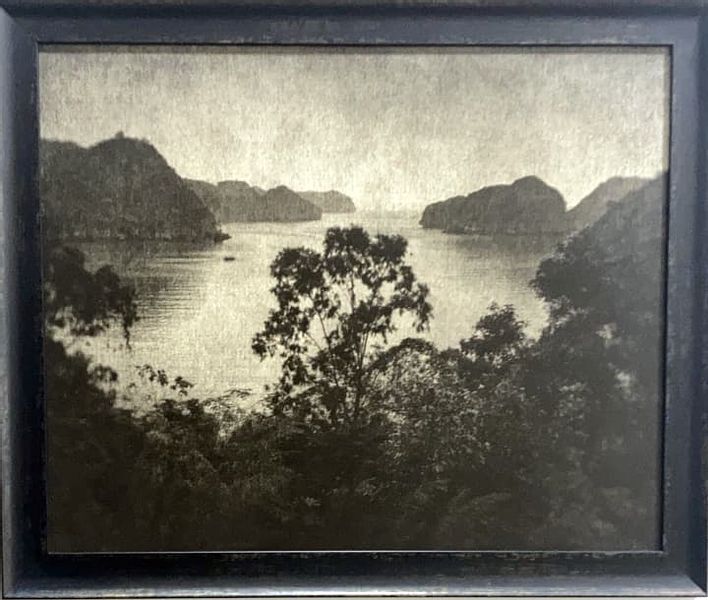 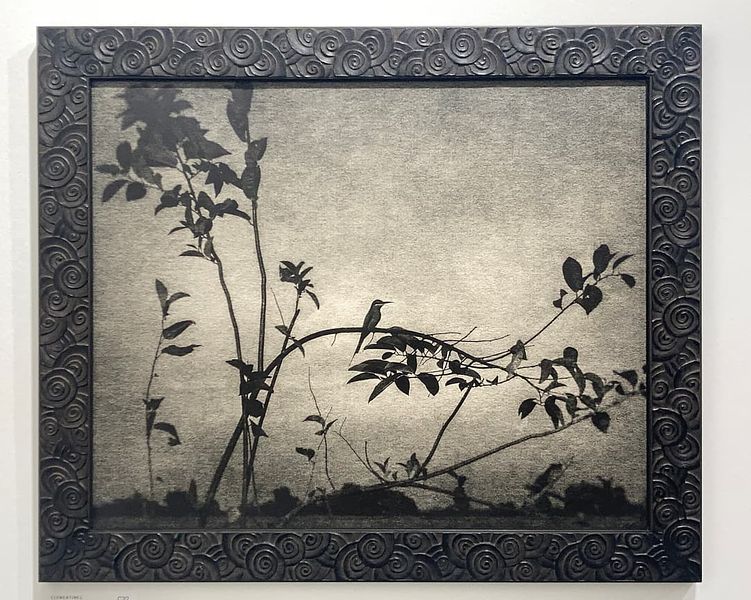 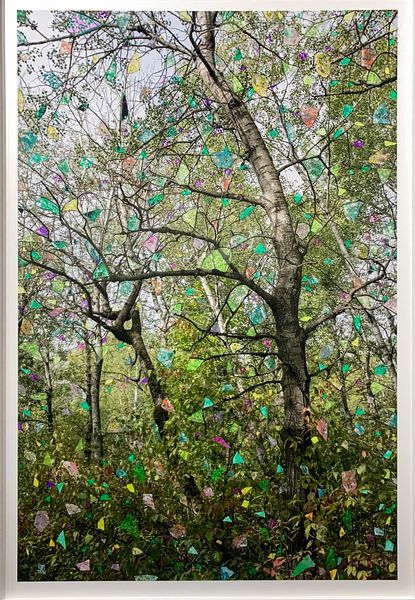 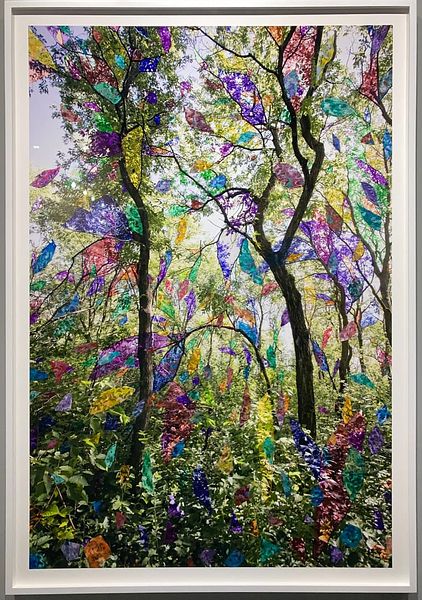 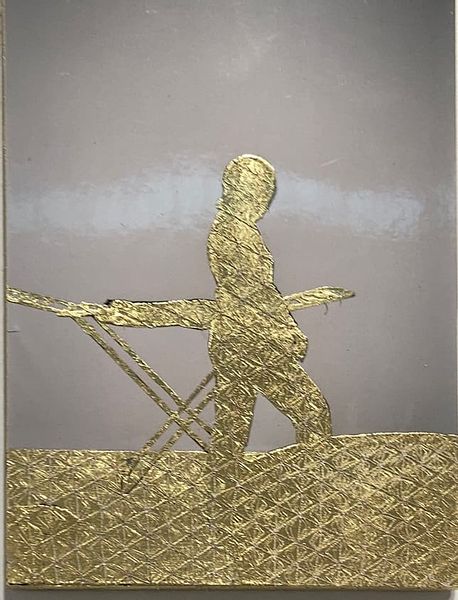 Carla Cabanas - I don't trust myself when I am sleeping 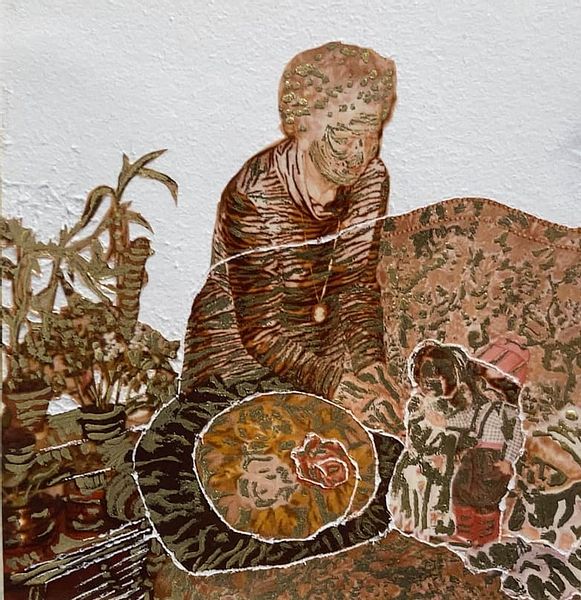 Carla Cabanas - I don't trust myself when I am sleeping II 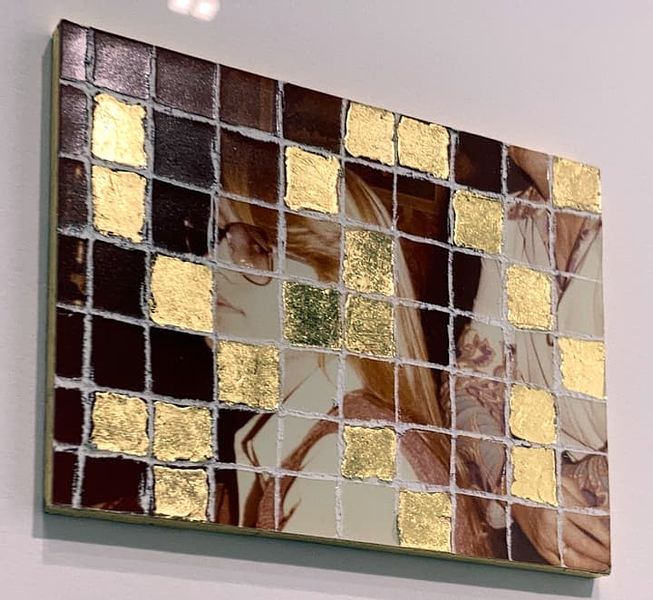 Carla Cabanas - I don't trust myself when I am sleeping II
This website uses cookies. Learn more
AcceptDecline